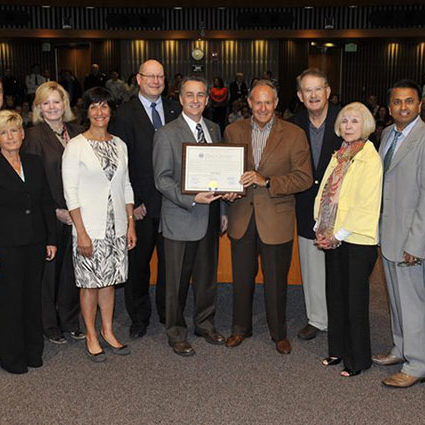 John A. Sobrato honored by the Santa Clara County Board of Supervisors for $5M gift to Valley Medical Center

At the April 15 meeting of the Santa Clara County Board of Supervisors, John A. Sobrato was presented with a resolution honoring the family’s philanthropic commitment to the county’s key public hospital. Interviewed by ABC7 reporter David Louie, John said “Valley Medical Center takes anyone, regardless of their ability to pay, whether they’re undocumented, documented, it doesn’t matter. They get absolutely excellent care and we want to support that effort.”

ABC7 / KGO-TV produced a follow up story describing the Sobrato Family’s strong philanthropic commitment to the region. Including interviews with John A. Sobrato, Jenny Niklaus (CEO of HomeFirst), and Rick Williams (CEO of the Sobrato Family Foundation) ABC’s coverage outlined Sobrato Philanthropies’ near $263M in community gifts since 1996, concluding with “Sobrato doesn’t just donate money, he shares their passion… and the valley that made him and his family rich is all the richer because of their philanthropy.”